Time Is Money: Labor and Your POS System 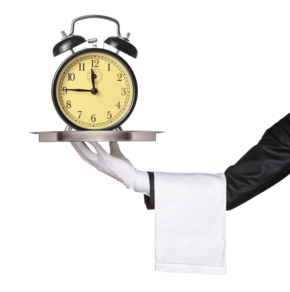 One of the biggest money-savers that a POS system affords is the ability to schedule and enforce labor.

Most restaurateurs have felt the pain of employees clocking in early, clocking in late, or “riding the clock,” where the employee clocks out much later than their scheduled shift. Managing labor cost can be one of the most difficult tasks facing a business owner, which is why it is all the more important to utilize the tools afforded by your POS system.

As always, we will be examining the options within POSitouch, so be sure to speak to your dealer about the abilities of your specific POS system. The first step in your labor management is, obviously, the entry of those employees into the system. Within POSitouch, the employee setup allows you to enter the most basic details, such as a name and employee number, and leave it at that. However, you also have the option to enter the employee’s social security number, the date of hire, pay rates, date of last raise and even set some permissions for system usage. Much like any POS system, the limits to the information captured are largely dependent on how far you, the end user, wish to go. Once the employee is entered, and a job and pay rate assigned to them, the flexibility of the system truly begins to shine.

The staff will generally be divided into departments, often FOH for front of the house employees like servers and bartenders, and BOH employees, which would include cooks, bus staff and kitchen management. You can further subdivide as needed. Within POSitouch, these employees will be automatically imported into the included Labor Scheduler program. This program, just like any other, is as powerful as the time you invest in it. It gives you the ability to schedule and print said schedule, of course, but the cost-saving comes with the ability to enforce schedules based on the schedule you’ve created. Through the programming, you can define grace periods which allow the user to set the amount of time the employee is allowed to clock in prior to or following the set schedule. For example, if I have an employee who is chronically late, I could set the grace period following the scheduled time to five minutes. If that employee attempts to clock in fifteen minutes late, the system will inform the employee that a manager authorization is required. Your management can decide what to do with the employee’s tardiness from that point, but you will be aware of the employee’s behavior. Likewise, a grace period may be set for the early punch-in, limiting an employee’s ability to punch in twenty minutes prior to their scheduled shift. You may override this with a manager function, but it will allow you the control to prevent employees from stealing an extra five minutes here or there. It has been our experience that simply by using these control measures, restaurants are able to save more than the cost of the POS system itself by the end of a single year of ownership. It’s amazing how a few minutes can add up!

The Labor Scheduler software also includes the forecasting feature. The use of forecasting allows the end user to predict the labor needs based on previous sales or customer counts. By way of a user-defined set of parameters, the system will predict the amount of labor hours required based on previous years’ sales information, and generate suggested labor hours to be scheduled. This can be incorporated into the Labor Scheduler scheduling feature to determine if you are scheduling too many or too few employees.

There are a variety of third-party labor software options, such as HotSchedules, which integrate with your POS system to allow for web interaction. Many will allow employee logons to a web site to see upcoming schedules, eliminating the “I didn’t know I was scheduled” excuse from any staff member’s repertoire as long as they have some sort of web access. As with all third-party offerings, make sure that your POS system will successfully integrate with the product before signing any agreement with the service.